The hawthorn genus contains hundreds of species of trees. While these trees go by many common names, the common name of “hawthorn” originally pertained to those growing in the United Kingdom. However, botanists now apply it to the entire genus. Most often used for hedgerows, the hawthorn tree grows into a thick, short canopy and usually has thorns.

Like so many other trees, the hawthorn contributes to its environment. Not only does it produce an edible berry consumed by both humans and animals, but many animals also depend on it for shelter. Sometimes, the fruit from the hawthorn tree is the only food around in the winter for birds. For centuries, we have used the berries from the hawthorn for jellies and jams. Also, it provided some sustenance through the cold winters.

Hawthorns grow across the Northern Hemisphere in the temperate zones. With large applications in both medicine and ornamental, the hawthorn holds a special place in many cultures. Overall, the hawthorn tree makes a beautiful hedge or bonsai tree. They are even grown for their flowers not only for their beauty but also because nectar-feeding insects love them.

So How Many Kinds of Hawthorn Trees are There?

The hawthorn genus contains many deciduous species. In fact, the official count is up for debate and could be 1000. However, the agreed-on number is closer to 200. We know the genus scientifically as Crataegus. It is part of the Rosaceae family. Because of the large number of species, we divide the genus into sections. Additionally, the sections are divided into series. In total, there are 8 sections. Also, there is 1 series that have not been assigned a section yet. The series without a section is the Series Montaninsulae.

Botanists use many criteria to divide the species. Location divides some of the sections, while characteristics divide others. For example, the Section Coccineaeincludes most of the hawthorn species in North America. Furthermore, the Section Douglasia contains hawthorns that produce black fruit.

How Large Do Hawthorn Trees Grow?

Hawthorn trees are small. All things considered, trees in the hawthorn genus stand no taller than 50 feet. However, they commonly stand closer to 15 to 20 feet in height. Despite their small size, hawthorn trees grow quickly. They will grow between one and two feet a year. The canopy spread matches the height of the tree. Most hawthorn trees spread between 15 and 25 feet.

Overall, hawthorn trees are short trees with wide spreading canopies. The bark is smooth and gray when the tree is young. Over time, deep fissures form in the bark. The shapeable nature of the hawthorn makes it an excellent choice to make bonsai trees. While not true for the entire genus, most hawthorn trees produce thorns. You will find the thorns on the branches and even on the trunks for some species. The thick canopy makes the hawthorn ideal for ornamental hedges.

The leaves grow tightly together. Moreover, the leaves are edible, but are soft in early spring and highly desired by chefs. The leaves are dark green and a simple shape.

Hawthorns produce beautiful flowers that add to their ornamental applications. The flowers grow in clusters and can be white or pink. However, the berries produced by the hawthorn tree grow in many colors. You will find “haws” as they are known in red, blue, black, and even orange. 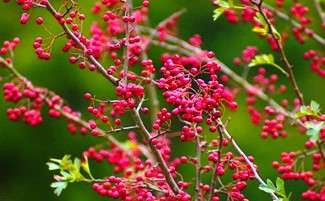 Where Can I Find a Hawthorn Tree?

Most of the Northern Hemisphere enjoy the hawthorn tree growing naturally. To be sure, Europe claims most of the hawthorn species. However, many species thrive in both Asia and North America.

You will find them growing in deep and moist soil.

In North America, the hawthorn territory stretches from Nova Scotia to Texas. And in Europe, the hawthorn grows widely. Most countries boast many species of hawthorn trees. Finally, you will only find a few species in Asia, but they are native to the areas.

How Long Can a Hawthorn Tree Live?

The average life span is 150 years. A well-maintained hawthorn tree will live for 400 to 500 years. However, the hawthorn is susceptible to diseases that will destroy it. Once they reach maturity, the hawthorn needs very little human intervention.

Climate and soil type matter greatly to the hawthorn. With proper growing conditions, the hawthorn will thrive for you with ease.

Can I Grow a Hawthorn Tree?

The hawthorn is an easy tree to grow. Ultimately, it prefers moist soil and full sun. Unique to the hawthorn, the berries persist even through winter. Both animals and humans depend upon this growth throughout the cold months.

It is easier to start with a sapling for this genus. Plan to plant the sapling in early spring or early fall. In the early days, water the regularly throughout spring and summer.

Unless desiring a certain shape, pruning is unnecessary.

Hawthorns grow successfully on their own in nature. This characteristic makes them hardy in a residential setting.

Some nurseries and botanists found success in grafting the hawthorn. However, the process is quite difficult. Starting from a sapling is best for the novice gardener.

Like roses, the hawthorn is susceptible to some diseases. You will see best success by protecting your plants from diseases and insects. All things considered, there are some resistant varieties you can choose from.

What Are Some Uses for Hawthorn Trees?

As has been noted, the hawthorn is an excellent species for a hedge. Not only does it grow in a dense form, but the thorns are also a major deterrent to anyone trying to climb through. The flowers produced by the hawthorn make the hedgerow not only functional but also beautiful.

Nectar-feeding insects seek the bright colors of the hawthorn flowers. So, while many animals depend on the hawthorn directly for sustenance, they can also thank it for supporting the pollination of other plants.

Experts at Mount Sinai cite multiple studies where the hawthorn plant helps with heart disease. In fact, ancient medicine men have used hawthorn for these conditions for 2000 years.

For centuries, humans have consumed haws. Especially in the United Kingdom, the haws are a delicacy. You can make both jelly and wine out of the haws. The Chinese use the haws in many dishes, from snacks to hams. Finally, the Mexicans use their species to celebrate Christmas with snacks, punches, and wines.

With the ancient history of the hawthorn tree, it is not surprising that many cultures formed strong beliefs around it. Scots and Celts hold the hawthorn in high regard. Traditionally, it symbolizes hope. Also, many believe that Jesus’s crown of thorns came from a hawthorn tree with its 3-inch thorns. Ancient cultures believe that uprooting a hawthorn will bring bad luck.

Serbian folklore gives advice that the hawthorn is an essential ingredient in slaying a vampire. Generally speaking, only stakes of hawthorn will truly kill the monster.

The dependence and allure around the hawthorn led to many books, poems, and folklore.

The hawthorn tree grows small compared to many lumbered trees. Therefore, it is not desired for large-scale projects. However, the wood is resistant to rot (but not insects) and quite strong. Hawthorn is typically used for smaller projects. Any item that is carved or turned is perfect for hawthorn. Manufacturers use hawthorn wood for both boat parts and tool handles.

The hawthorn genus is expansive. In fact, scientists have already assigned over 200 species to the genus. However, while the genus is large, the hawthorn tree itself is not. Only growing to 20 feet tall on average classifies this tree as small. They grow at a quick rate, though. The canopy is dense, and the thorns found on the branches are large. Given these points, the hawthorn is ideal for privacy hedges in your garden, yard, or public park.

Unique to the hawthorn, the haws (or berries) produced are present all winter long. Many animals and humans desire the sometimes-tart berries. We make them into jams, wines, and other delicious snacks. Birds and insects depend on the hawthorn for food. Thankfully, most of the Northern Hemisphere boasts these beautiful trees. Hawthorn trees grow in most of the temperate region of the hemisphere with a large concentration in Europe.

All in all, it is an easy tree to grow, even for the novice gardener. Your primary concern will be finding an area with ample sun and providing enough water in the first growing season. With a little bit of planning, you can turn this small tree into the perfect addition for your yard.