Hornbeam Trees: What Should I Know?

The hornbeam tree is a lesser-known tree. While the hornbeam grows across the Northern Hemisphere, they are primarily found in Asia. Out of the 40 species, only four grow outside of Asia. Overall, the hornbeam supports the ecosystem by providing food to many bugs and larvae. The wood of the hornbeam is a striking white. It is an incredible hardwood that is sometimes nicknamed “ironwood”. We use the wood of the hornbeam sparingly in carpentry because the wood is so stout. However, the strength of the wood makes it an excellent choice of tool handles, carving boards, and gears for wooden machines.

Additionally, the hornbeam tree is a small deciduous tree. Almost all species stand well below 100 feet in height. The hornbeam flowers, both male and female catkins, on the same tree and produced a small nut. Finally, while most of the hornbeam species live on the Asian continent, those species found elsewhere abundantly grow in their local environments.

So How Many Kinds of Hornbeam Trees are There?

We categorize approximately 40 species as hornbeams. Almost all the species are native only to eastern Asia and even more so, to China. Also, North America claims only one native species, with Central America claiming another.

Furthermore, two species of hornbeams grow in Europe. The scientific name for the hornbeam genus is Carpinus. The Carpinus genus is part of the Betulaceae family.

Many of the Asian species are missing common names. However, here is a list of the more widely known species:

How Large Do Hornbeam Trees Grow?

The average height of the hornbeam genus varies from species to species. For the most part, hornbeams are small to medium trees. Most of the species stand between 40 and 60 feet tall. Notably, the European hornbeam reaches closer to 100 feet tall.

While they are not tall trees, the hornbeams grow very wide. The average width is between 30 and 40 feet.

To be sure, the Hornbeams grow quickly. They average between one and two feet yearly in growth.

The hornbeam produces a nut that is less than an inch long. Also, the bark is smooth and gray.

The leaves of the hornbeam are oblong. Dependent on the species, some are more lance-shaped and some are egg-shaped. 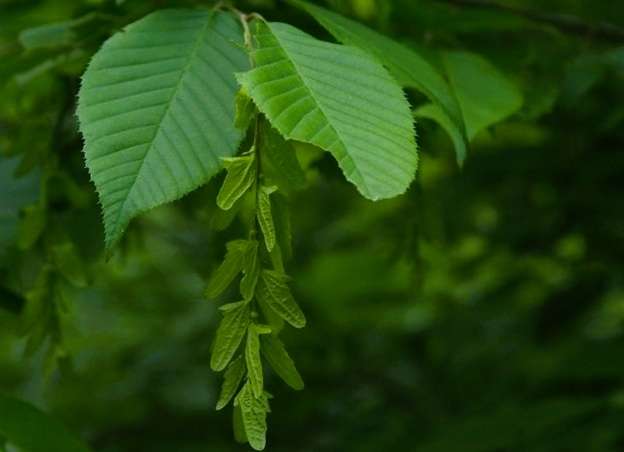 The leaves have ribs and are dark green in color. Typically, they fall in autumn, but it is not always the case.

Where Can I Find a Hornbeam Tree?

Hornbeams grow across the Northern Hemisphere in the temperate zones. In the United States, the American hornbeam lives across the eastern half. Also, hornbeams grow from Maine down to Georgia. The southernmost states are the only ones absent of hornbeam trees. You will find hornbeams growing as far over as Texas and even into Mexico.

The European hornbeam is native to the southern United Kingdom and planted across the continent of Europe. The hornbeam grows from France to Turkey and stretches down to Italy and parts of the Middle East.

Finally, Asia boasts the most hornbeam species. Overall, China claims a significant amount of them. However, you will also find them growing in Korea, Japan, and parts of India.

How Long Can a Hornbeam Tree Live?

According to the Piedmont Master Gardners, a hornbeam tree lives between 50 and 150 years. Even though 150 years sounds like a long time, most other species of trees live much longer. This genus is a short-lived tree. Despite the short life span, the fossil record shows evidence of hornbeams back 16 million years ago.

Can I Grow a Hornbeam Tree?

Various species of hornbeams grow all over the world. Ultimately, hornbeams are relatively easy to grow and will sustain most circumstances. As long as you can find a location with full sun and moist, well-drained soil, you will find success with your hornbeam. Additionally, this tree can even survive some flooding once established.

Hornbeams grow expansive root systems. Therefore, they do not transplant well. It is best to start from a seed outside or from a sapling at a nursery. Remember to consider the full size of your tree before planting it. Also, while full sun is desired, the hornbeam is highly adaptable and will thrive in almost any light.

If you choose to start with a seed, gather them in late summer. You will want to find them right as they fall off the tree because a dried-out seed will not produce. Plant them immediately in a small outdoor pot. Water them regularly to keep the soil moist, but avoid direct sun for this initial growth. In springtime, move the pot to a sunnier location. After about a month at this location, the seeds should germinate. You will transplant your seedlings in summer to their permanent location.

During times of drought or dry spells, you will need to water your hornbeam even as it matures. It adapts well to almost all situations except drought. The tree grows an expansive root system to give itself the best possible chance.

Overall, your climate will affect your hornbeam very little. In the United States, hornbeams grow in the chillier North and in the sweltering South.

You can shape a hornbeam into an excellent hedge. Pruning is necessary early on to reach the desired shape.

Hornbeams provide many functions to the native wildlife. Many animals depend on the hornbeam for food, including deer, moths, and birds. Additionally, beavers love to use hornbeam wood for their dams.

All things considered, the hornbeam tree is resistant to many pests and diseases. It is even a host plant for many bugs as they grow and develop.

The leaves of the hornbeam hold special characteristics. Namely, the leaves are hemostatic. This means that they slow your bleeding if compressed on an open wound.

The ancient Romans built their chariots out of hornbeam to symbolize the strength of the wood.

The Great Gatsby by F. Scott Fitzgerald titles its chapters after trees and Chapter 4 is “Hornbeam”. Furthermore, hornbeam is heavily mentioned in the Harry Potter book series. Wands are made of various types of wood. In the book series, wands of this wood were special. They absorbed the passion and being of the witch or wizard. This allowed the wand to almost have an honor code matching the owner.

Also, many mentions of hornbeam in movies are from the Harry Potter series.

For residential and commercial applications, we rarely use hornbeam wood. The timber is simply too strong and too difficult to work with in massive production. While the tree itself is resistant to diseases and pests, the timber is very quick to decay. However, the wood is very durable to wear. It is very difficult to scratch. Moreover, the trunk of the hornbeam is quite narrow. It only reaches one to two feet in diameter. Because of this, we rarely grow commercially.

Even though it is not used in larger applications, hornbeam is used in smaller applications. Tool handles, parts of pianos, and wooden gears are all produced from hornbeam.

The hornbeam tree is a small tree. Oftentimes, the hornbeam only reaches 50 feet in height. However, the European hornbeam grows up to 100 feet. While the leaves have some significant medical uses, we rarely use the timber. The wood is incredibly strong. There are approximately 40 species spread across the world. However, the greatest variety grows across the Asian continent. The other northern continents only claim a handful of species.

If you plan to grow a hornbeam, whether individually or as a hedgerow, the tree adapts to almost all growing conditions and is easy to grow. You will just need to know that it does not transplant well because of an expansive root system. Even though hornbeams only live for around 100 years, they grow fast. Given these points, the hornbeam is an exceptionally easy tree to grow. It is resistant to pests, disease, and flooding. The only real threat to your hornbeam is drought, which is easily mitigated with proper watering.