The pear fruit is one of the most widely produced fruits in the world. You will find pear trees growing across the entire Northern Hemisphere, but they are native to Europe, Africa, and Asia. The genus originated in Western China in one mountain range. Over time, the species spread and developed into 20 primary species.

Overall, the pear tree is a medium-sized tree. The genus of the pear tree contains 45 species. However, there are about 3000 varieties of pears. Farmers begin harvesting the pears in late summer and into early autumn based on variety. Generally speaking, humans consumed pears for thousands of years. We eat them fresh, turn them into juice, dry them, and can them.

Pears are mostly water with almost 85% of its contents being so. We consider China to be the largest producer of pears in the world. In fact, over 23.1 million tons were grown in 2020.

Table of Contents
1
So How Many Kinds of Pear Trees are There?
2
How Large Do Pear Trees Grow?
3
What Does a Pear Tree Look Like?
4
Where Can I find a Pear Tree?
5
How Long Can a Pear Tree Live?
6
Can I Grow a Pear Tree?
7
It is Time to BRANCH out into some fun tree facts!
Natural Uses
Artistic Uses
Residential/Commercial Uses
8
Wrap Up

So How Many Kinds of Pear Trees are There?

The Pyrus genus comprises 45 species. Those species are further divided into over 3000 varieties. Also, the Pyrus genus is part of the Rosaceae family. Some of the most common species in the genus are:

The Pyrus calleryana or the Callery pear is native to China. Additionally, it stands approximately 20 feet in height. Pear farmers used the Callery pear tree to graft other species that are highly desired for their fruits such as the Bradford variety.

The Pyrus communis or the common pear, is native to Europe and western portions of Asia. Many cultures depend on this sweet fruit. Similar to the Callery pear, the wild common pear was cultivated into two subspecies. Evidence shows cultivation occurred in Ancient Greece and Rome.

Snow pears from the Pyrus nivalis are slightly sour, but still delicious. All in all, the snow pear withstands drought well and extreme temperatures. Most pear trees need a frost to grow properly, but this species survives in the harshest conditions.

Finally, the Wild European pear or the Pyrus pyraster is very similar to the common pear and thought to be its ancestor. However, it only stands 10 feet as a shrub and grows to 60 feet as a tree. These trees only grow in Western Europe.

How Large Do Pear Trees Grow?

Pear trees grow to a wide range of heights dependent on their species. In total, heights range from 15 to 60 feet. Although, the preferred height for farmers is closer to 20 feet. The width also differs but is typically between 10 and 40 feet. Some trees grow round naturally, but most are pyramidal.

Removing upper branches to change the shape and curb growth is the ideal way to prune this tree.

Pear trees are deciduous and lose their leaves in winter. Ultimately, the trees are medium. The tree will naturally grow into a pyramidal shape with a narrow crown at the top.

The leaves are glossy, long, and shaped like an American football. Before the pears grow, the pear tree produces beautiful flowers. The flowers range from white to light pink. All the flowers, regardless of species, sport five petals.

The trees are most widely recognized by the fruits that they produce. However, pears are not as standard as you may think. 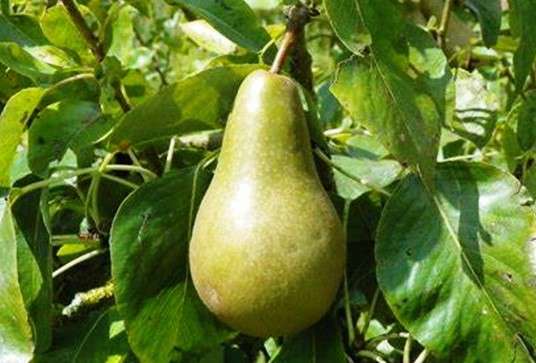 The picture shows what many of us think to be the expected pear shape. Unlike apples that keep the same general shape, pears range from the large bottom shape to a round shape. In fact, some pears are difficult to differentiate from apples.

Pear trees will not produce pears for 3 to 10 years. You will know your tree is ready when it flowers in the spring.

Where Can I find a Pear Tree?

Pear trees grow across the Northern Hemisphere. Generally speaking, they grow in the temperate regions with very few species in more extreme climates. Pears originated in China. With 20 primary species, farmers have carried the species across the globe. For the most part, pears are centralized around Japan and China.

While pears grow across most of the European continent, Italy, Spain, and France grow the most. In fact, court records from Henry VII show imports of French pears.

With their easy demeanor, pear grow in most soil and climate conditions, but produce better fruit in an area that produces frost.

How Long Can a Pear Tree Live?

Pear trees live short lives. Even in optimal conditions, a wild tree will only last 50 years. However, there are some species with proper care that last for closer to 150 years.

The oldest pear to live grew in an ancient pear garden in China. It lived for almost 500 years before its death in 2013.

If you notice your tree still absent of leaves in the spring, it may have reached the end of its natural life.

Can I Grow a Pear Tree?

Farmers and home gardeners alike know the pear tree is easier to grow than apple trees. However, like the apple tree, pears need cross-pollination and therefore need at least two varieties to produce pears.

You should plant a potted tree from a nursery in late spring when the threat of frost has passed. A bare root tree will transplant better slightly earlier in spring.

You will want to select a location that is well-drained without significant standing water. Fruit trees produce the best crop in full sun.

Water your tree through the first growing season and during dry spells for subsequent seasons. Protecting the trunk for the first few years is vital. Many animals like rabbits enjoy chewing on the bark. You will know when the tree can protect itself when the bark is flaky.

Additionally, a stake will help grow your tree straight. It gives further support in rough weather until the roots are firmly established.

Over the years, your tree will grow 18 inches to 24 inches per year. If your tree is not growing to that level, the soil needs more nitrogen and compost will help significantly.

Pruning is a common practice to promote wide branches and to keep the height of 20 feet. For most harvesters, this height is perfect.

Understandably, we use the trees primarily for the fruit they produce. Pears are a significant portion of our diet. We eat them fresh, can them, and turn them into juice. Countless recipes add the pear for a juicy and light flavor.

Many cultures use the pear for medicinal purposes. Even today, pediatricians will suggest pears for some issues. Pears help with mild indigestion issues such as nausea, fluid retention, and diarrhea.

Not only do farmers use pears as a way of making money, many home gardeners add pear trees to their yards. When flowering, pear trees are gorgeous with a full canopy of white flowers. Pears grow abundantly on the tree.

Pear trees are beautiful and a great addition to any artwork or backdrop. Also, the trees are associated with prosperity and happiness.

The pear tree alludes to Jesus in the Bible. In fact, the Bible mentions the pear often regarding the Virgin Mary.

The Chinese believed the pear tree was the symbol of immortality.

Likely the most known artistic reference to a pear tree is in the classic Christmas carol from the 1700s, “The Twelve Days of Christmas”. After all, “On the first day of Christmas my true love sent to me, A partridge in a pear tree.”

We consider the wood from the pear tree to be a hardwood. The heartwood holds a pink/red color. Overall, the grain is straight, and the wood is easy to work with, even by hand. However, it is non-durable and prone to rot.

In Europe, pear wood is premium and highly sought after. On the other hand, we rarely use it in the United States. Many musical instrument manufacturers use pear wood. Moreover, it is used for finer cabinetry work and carving.

The pear is one of the most consumed fruits in the world, second only to the apple. All in all, the tree grows quickly in ideal conditions and is relatively small. Because of the cross-pollination, you will need two varieties of pear trees. Even two trees will produce a significant amount of fruit. Pear trees grow across the Northern Hemisphere in the temperate zones.

With over 3000 varieties of pears covered by 45 species, you will take a long time to sample them all! Many of the species are exclusive to China, but species also grow in Europe and the United States. Finally, the pear tree grows easily for most amateur arborists. Sun and water are vital. With those two things in mind, you will have no problem planting your pear tree.